Come Out and See Anne Marie in [title of show] 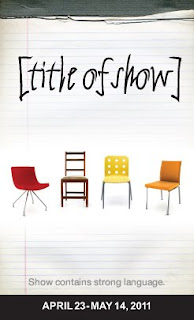 My lovely wife Anne Marie will be performing in [title of show] at The Little Theatre of Alexandria from April 23-May 14.  If you can make it out to support her I would appreciate it.  I'm planning on attending Easter Sunday, hope to see you there.

Directed by Michael Kharfen
Music and lyrics by Jeff Bowen
Book by Hunter Bell
April 23–May 14, 2011

[title of show] is a unique and quirky musical about two guys who write a Broadway musical about two guys writing a Broadway musical. With a couple of their actress friends, they journey from the unemployment line to the bright lights of Broadway. Don’t miss the show that The New York Times called “...genial, unpretentious and far funnier than many of the more expansively manufactured musicals that make it to Broadway.” This is a 21st century update of “putting on a show” clever songs and witty dialogue. (Strong Language)